Augustine Guma has traveled a great distance from Uganda to Virginia. 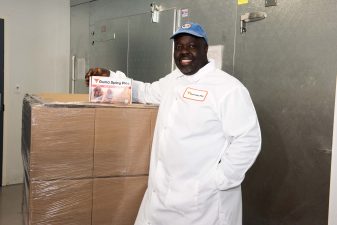 More than 7,000 miles separate the East African country from the East Coast of the United States. But Guma’s longest journey has been from surviving the civil wars that marred his childhood to become a successful entrepreneur with multiple businesses headquartered in Woodbridge.

Throughout it all, the same skills helped Guma succeed. The savory East African pies he learned to make and sell as a child now form the core of his diversified enterprises, Gumax International. While he also offers accounting and software services, it’s those Guma Pies that represent the heart of his business.

Guma was born in 1971 near Kampula, the Ugandan capital situated on the shores of Lake Victoria. By 1981, the family had moved north, where Guma was attending school when the Ombaci Massacre took place, following the overthrow of military dictator Idi Amin. That tragic incident left about 100 people dead and countless others wounded and traumatized. Guma, one of the few children to survive, fled to the neighboring Democratic Republic of Congo.

That experience affected Guma in ways that have reverberated from his native Uganda to his adopted America. It was during the time as a refugee in Congo that he encountered a pair of American institutions that left a lasting impression – the American Red Cross and the U.S. military.

“They were giving out food, blankets, and even ate grasshoppers with local people when food was scarce,” he said. “I later found out that they were from the American Red Cross and U.S. Army.” Those acts of generosity stuck with him: “If a stranger can love you with no strings attached, so much so that he will sacrifice his life to protect you, suffer with you, and even die for you, who am I not to pay back?”

When Guma returned to Uganda to continue his education, his family struggled to pay the tuition. That’s when he first began selling the savory pies that continue to provide his livelihood. Known as samosa, or sumbusa, in the East African region, he now markets them as Guma Spicy Pies.